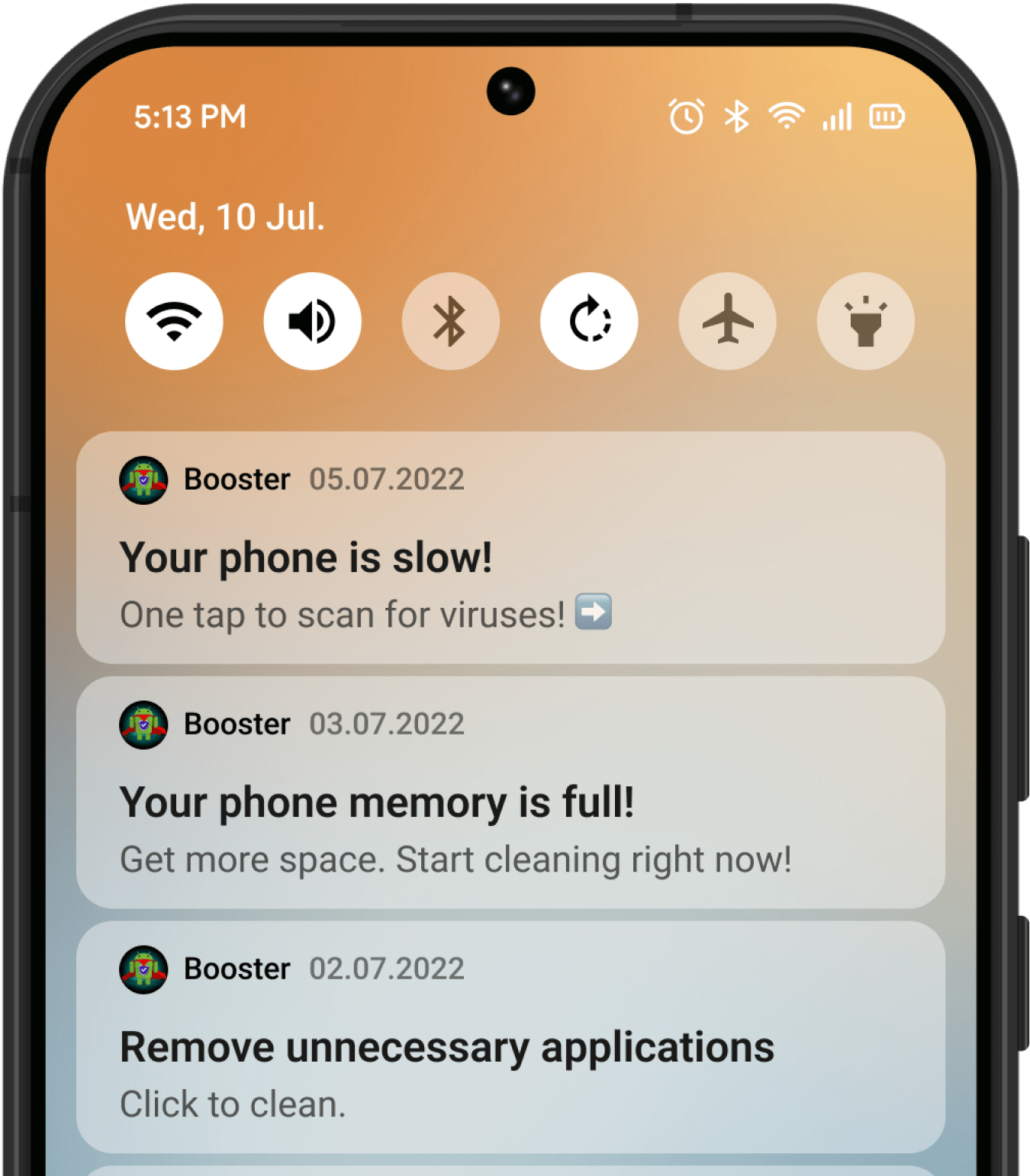 Similar to other free apps in the category, Booster’s unit economics are built around acquiring a large volume of cost-efficient traffic and monetising it by showing in-app ads through mediations like IronSource, Google AdMob, Appodeal, and others.

Because of the app’s immense MAU, integrating existing push notifications tools was not economically viable due to high costs. Booster is focused on inexpensive installations at a vast scale, and most of the push automation tools would not fit into its unit economics.

On the other hand, developing a highly loaded solution in-house would require to find several backend developers for at least two-three months. And even after that, there will be another problem of maintaining additional in-house infrastructure.

Another challenge for Booster was manually managing push notification campaigns. The process was time-consuming and extremely difficult to scale, but the team still had to follow it daily because of its immediately visible impact on ad-mediation earnings. This is why the Booster team decided to try ML push notifications from nGrow.

nGrow successfully automated and optimised mobile push notifications for Booster. After demonstrating a consistent 20x ROI result on a large user scale, it was implemented across the other apps of this publisher with 10M+ collective MAU. 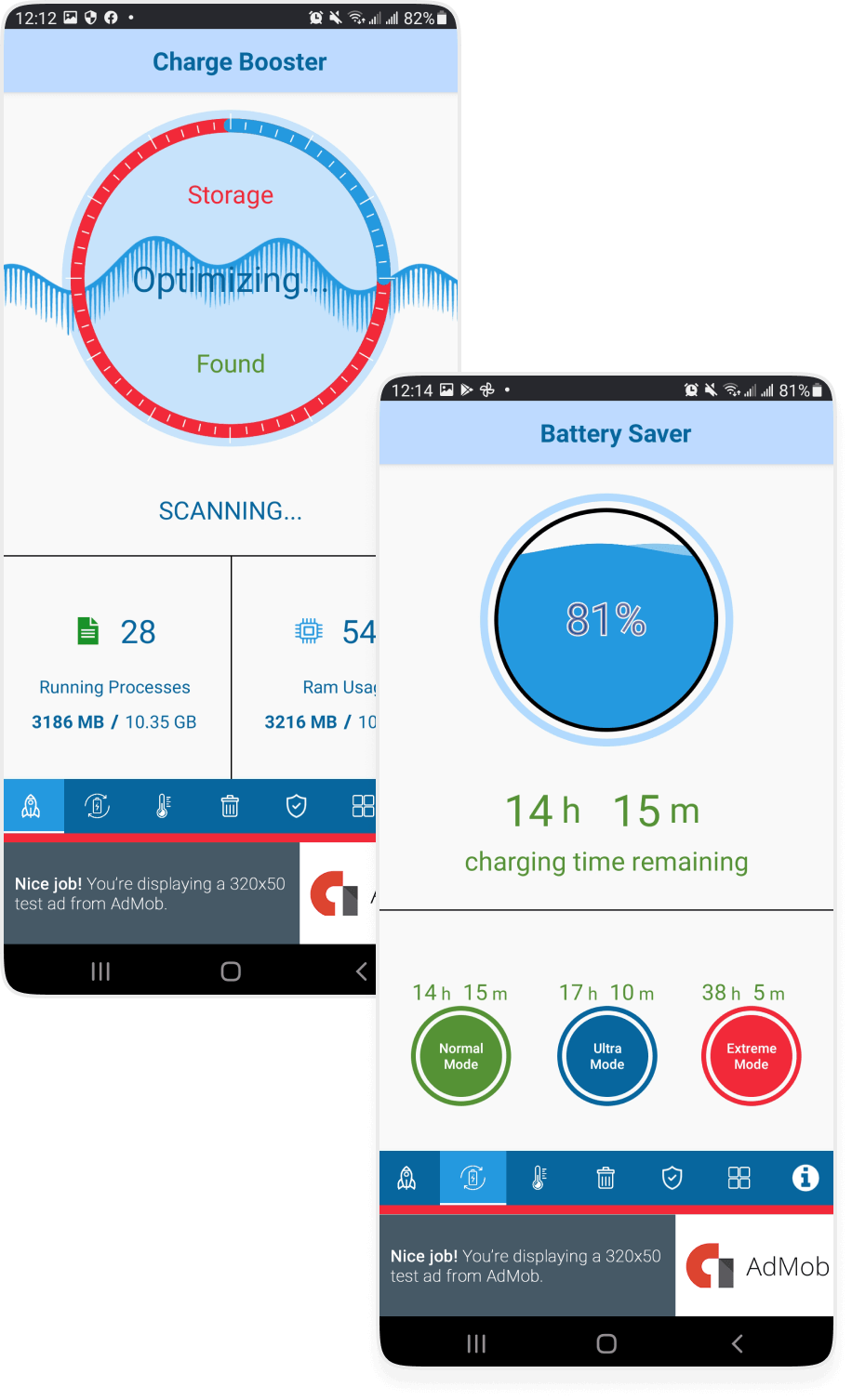 Booster for Android reached out to ngrow in early 2021when they were looking for a way to automate their push notifications channel and optimise revenue.

At that time, the app had already had a good acquisition strategy and over 7 million downloads on Google Play Market.

The team had also built their own push campaigns, which were based on manually sending daily push messages at a pre-scheduled time to all app users.

Although this plan had some positive impacts, it was cumbersome and challenging to maintain. Booster was just one of the apps in a larger product portfolio, where all push notifications were managed manually in the same way.

Automating push notifications was really important — this would have eliminated the need to regularly assemble individual push scenarios for each app and given the team more time for product development and analytics.

With the most of revenue coming from in-app ads, it was also crucial to optimize push time delivery and frequency to establish the best approach to app users. A better click-through rate would increase the number of active user sessions, which would boost ad impressions and grow revenue.

ngrow helps us with automated push notifications and a reliable revenue growth. Our only alternative was developing our own push platform which is very difficult and expensive. 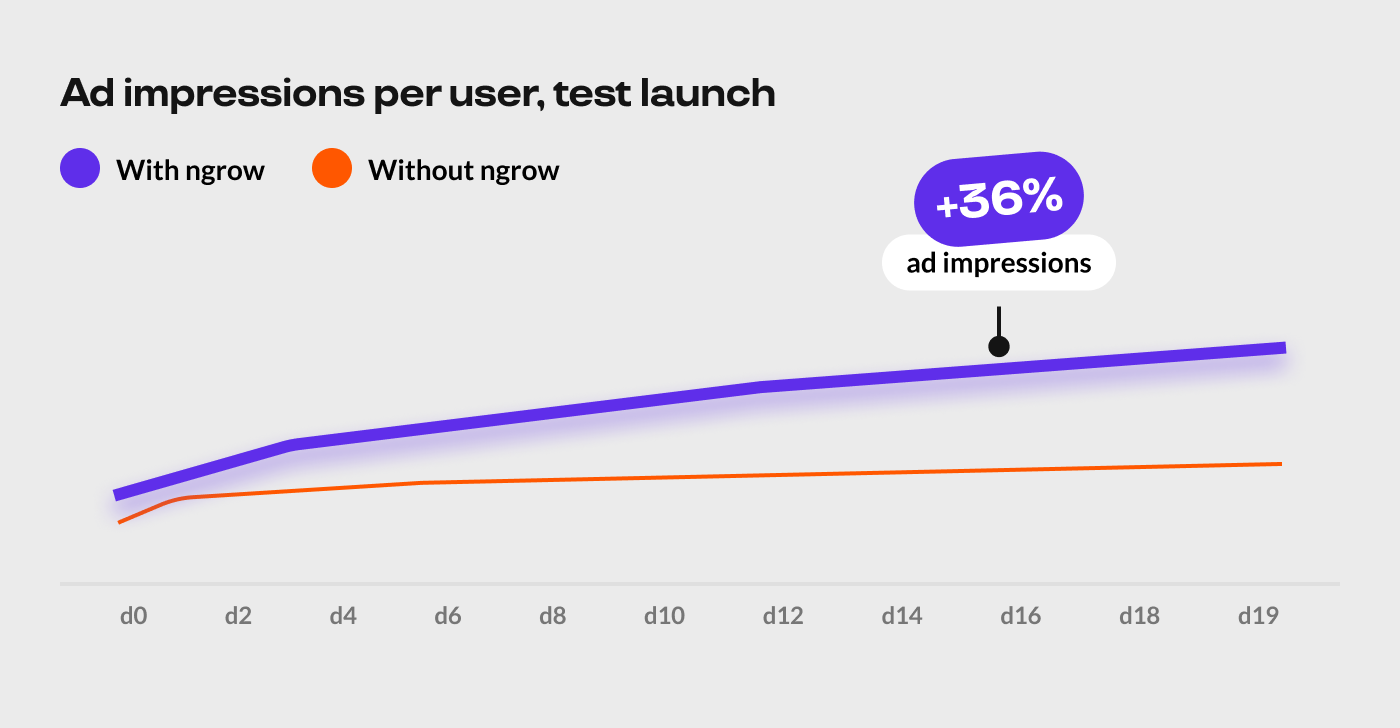 One of the main challenges for the Booster team was the cost of a potential solution. With 10M+ active app users across several apps, it was apparent that implementing push notification tools would be expensive. The price range for this MAU was between $5,000 and $7,000 per month.

Just in 3 weeks after the test launch, ngrow demonstrated a 36% ad impressions and 32% revenue growth vs legacy push campaigns

Moreover, it would likely be required to invest even more time into integrating another SDK, testing, and configuring new push scenarios from scratch. This made ngrow a great fit due to its fast no-code integration via API and flexible pricing model. The team had decided to pick the Active Users cohort and run the test launch to compare the revenue results from ngrow notifications versus the control group with their “native” push messages.

Just three weeks after the launch, ngrow had demonstrated a 36% ad impressions growth across Active Users vs legacy manually configured push campaigns. App’s ads revenue, directly dependent on such events, had also accelerated by 36% as well.

When the Booster for Android was initially starting with ngrow, its primary goal was to see how push channel optimization impacts ad impressions and lifetime user vaalue.

The top priority for Booster’s team was automating the push marketing channel. ngrow uses Machine Learning algorithms, which essentially take on a marketer’s role: analyse in-app events, build behavioural models, and create individual targeting plans for each user. For the client, it meant that they now only needed to provide push message content. The rest was handled by ngrow.

The second priority was CTR optimisation to drive more ad impressions. ngrow dynamically tested all push content, and identified texts with the best conversion rates. The system then focused on the push notifications that produced maximum outputs.

The client’s apps have a large number of geographically dispersed users, making any manual content A/B tests really challenging. Even on the first test launch, the team uploaded over 50 push texts in multiple languages. Automating this whole process was another excellent use case example of ngrow. 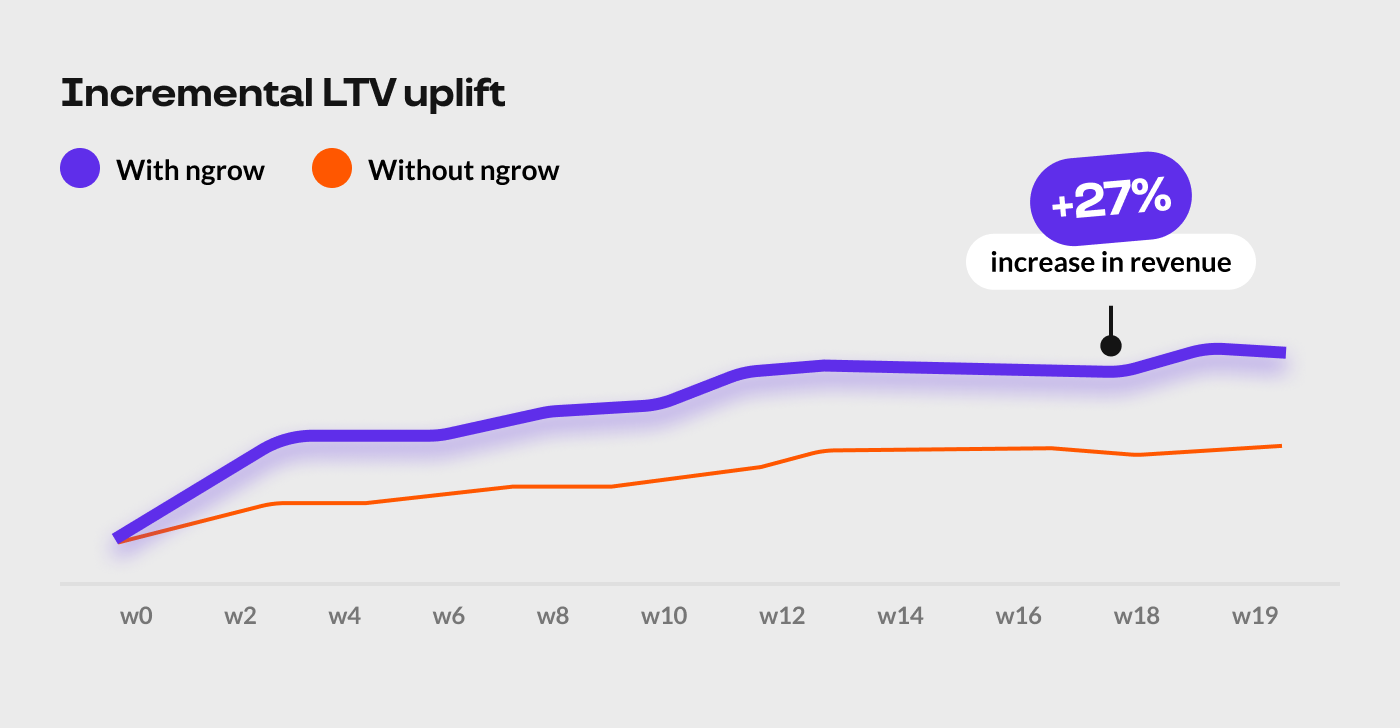 Switching from manual push notifications to ngrow has helped Booster’s team achieve their goals. Automating the push channel allowed them to eliminate manual work and save hours of time every week.

Fast no-SDK implementation, flexible pricing, and automation helped to get ×20 return on every dollar invested in push campaigns.

Using nGrow, Booster for Android achieved a 27% increase in revenue. Additionally, user retention has also got up by more than 30%.

Following the success of the Booster app, ngrow was later implemented across other Publisher’s products which helped cut operational costs and maximise revenue.

Get started today or schedule a demo for your personal onboarding

Get to know how to improve your app LTV

We tell you how to apply best practices for user engagement with push notifications from market leaders.